In 1790 and 1791, Emanuel Schikaneder produced a series of fairy-tale operas at the Theater auf der Wieden that culminated with the premiere of Die Zauberflöte (The Magic Flute) for which Wolfgang Amadeus Mozart wrote the music. Although Schikaneder probably wrote the libretto, Karl Ludwig Giesecke, the playwright he most often worked with, also claimed authorship. The writer based his text on earlier plays such as Sophie Seyler’s Oberon. By combining elements of Masonic ritual with fairy tale opera, the librettist created a fine musical work in which a clever artist could make good use of his abilities as a comedian and a singer. Although Mozart died shortly after its premiere, The Flute was a monumental success that was seen over a hundred times in the short space of a few months. Schikaneder wrote, “Mozart’s work is beyond all praise. One feels only too keenly, on hearing this or any other of his music, what the art has lost in him.”

On March 7, 2015, Arizona Opera presented Dan Rigazzi’s production of Die Zauberflöte in Tucson. Inspired by the works of René Magritte, designer John Pollard filled the stage with various sizes of picture frames, windows, and portals from which he leads us into Mozart and Schikaneder’s dream world. Costume Designer Leslie Bernstein’s clothing was timeless and opulent but she might have been wiser if she had avoided thinly veiled midriffs for singers because of their constant use of muscles in that area of the body. 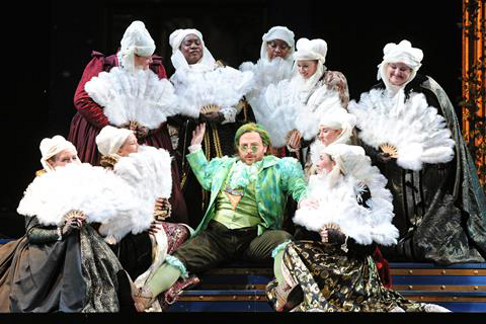 The star of the show was Marion Roose Pullin Studio Artist Sarah Tucker who sang Pamina. She has already been a Marcello Giordani Young Artist and Metropolitan Opera National Council 2014 Auditions semifinalist. Her voice was sweet and her high notes had a radiant bloom. David Margulis was an energetic Tamino who was only momentarily laid low by Pollard’s iconic monster. He sang with sumptuous lyrical sounds conveyed on a well-honed legato. Chad Sloan was a sparkling Papageno with a robust voice who never stopped moving. He made you believe he could easily capture the most elusive birds with his bare hands. As Papagena, the lover who does not appear until the last act, Rhea Miller sang with dulcet tones and showed a great deal of affection for the many children who magically appeared when the couple sang of their love.

The Three Ladies, soprano Andrea Shokery, along with mezzo-sopranos Beth Lytwynec and Maria Dominique Lopez, sang with limpid harmonies while taking advantage of every comedic possibility. As the Queen of the night, Lindsay Russell negotiated the highest notes with unusual security, blazed through its difficult runs, and gave her character understandable human traits. I couldn’t help wondering about the age-old question as to whether she had once been Sarastro’s lover! He hated her with more emotion than anyone would waste on a casual enemy! A fine bass, Nicholas Masters sang his character’s views passionately with robust bronze tonal colors.

Second year Studio Artist Calvin Griffin sang the Speaker and the lower-voiced Armed Man with stentorian tones. Ian McEuen was a thoroughly amusing Monostatos while Studio Artists Andrew Penning and Chris Carr were committed priests. Dressed in resplendent costumes, Henri Venanzi’s choristers combined visual spectacle with vocal acumen as they sang Mozart’s immortal harmonies. Scott Terrell’s conducting was generally brisk and he followed the singers, giving them the space they needed to form believable characters. Only on a few occasions did he slow down enough to slacken the tension for a moment or two of respite. We had a pleasant trip to Tucson and hearing the performance in a different hall provided an interesting contrast.